Passing Time: An Essay on Waiting 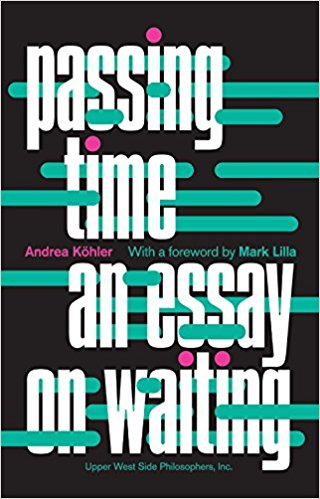 “A lovely jeu d’esprit for those waiters who like their abeyance with a touch of the metaphysical.”

Andrea Köhler’s beautiful and profound reflections on life’s interstitial spaces—the queue, the waiting room, the place held for two when only one has arrived—at once poetic and philosophical, intimate and analytical, form the perfect antidote to the headlong rush of our culture … It is one of those rare books that, like Rilke’s ‘Archaic Torso of Apollo’, makes you feel that you must change your life, or perhaps more urgently, the way you think about your life. Truant time is rescued and restored here, and nothing could waste it less than to read this lovely book. (Jonathan Wilson)

“The way we live now is by making war on human—and humane—time. Historians will record that we were complicit in the dictatorship of speed and the repudiation of patience. But not all of us; and certainly not Andrea Köhler, who has written a book dripping with wisdom. Köhler has an exquisite feeling for the tempo and the temporality that is required for a decent and beautiful life. There are deep and true observations on every page. PASSING TIME is a gift to the resistance.”

“Apart from being clear-eyed and utterly original, PASSING TIME is also irresistible. It manages to make you think that you’re as smart as it is. I read it twice just to treat myself.”

“This is one of the most thoughtful, insightful, and enchanting books I have read in a long while. Köhler draws on personal experience as well as the testaments of literature and philosophy to show how waiting, in its various modalities, lies at the heart of the human condition. A book to be reread many times.”

“All the excitements and longueurs of anticipation are fully satisfied in this gem of a book. Andrea Köhler’s beautiful and profound reflections on life’s interstitial spaces—the queue, the waiting room, the place held for two when only one has arrived—at once poetic and philosophical, intimate and analytical, form the perfect antidote to the headlong rush of our culture. I picked this slim volume up in a bookstore and didn’t leave until I had almost finished it. It is one of those rare books that, like Rilke’s “Archaic Torso of Apollo,” makes you feel that you must change your life, or perhaps more urgently, the way you think about your life. Truant time is rescued and restored here, and nothing could waste it less than to read this lovely book.”

“…there might be more living done in our in between moments than in those we have big names for. Waiting in line, hoping you’ll get a ticket; waiting for someone to call; waiting to find the courage to make the call; waiting to hear results. We live in abeyance. What a beautiful book.”

“Graced with lyricism, PASSING TIME is an engaging meditation on the ways in which human beings are forced—and choose—to mark time, from earliest childhood to the final moments of life. This is an unsparing, yet often poetic, essay on the ordeals and pleasures inherent in the universal experience of waiting.”

“…a book of great intelligence and rare beauty…”

“What are we doing when we aren’t doing anything? We’re waiting. Or, as Köhler would prefer, we’re passing time. As Mark Lilla notes in his foreword: ‘Man is the waiting animal…What exactly is it to wait?’ Köhler, the cultural correspondent for a Swiss daily newspaper and winner of the 2003 Berlin Book Critics Prize, posits, ‘waiting is a state in which time holds its breath in order to remind us of our mortality. Its motto is not carpe diem but memento mori.’ Now available in English, her extended essay is a hybrid: part meditation, part philosophy, part autobiographical musings. One comment about waiting leads to another, which leads to some author’s comment on the first comment, which leads to another comment. The book reads like a string of epigrammatic musings. Köhler goes on to describe all manners of waiting and their significance, creating a sort of taxonomy of waiting. There’s anxiety, hesitation, expectation, laggardness, etc. She draws on a wide variety of writers, mostly European, to help her along the way: Barthes, Benjamin, Foucault, Camus, Blanchot, Nietzsche, Heidegger, and Peter Handke, the self-proclaimed ‘lover of waiting.’ Köhler describes him as ‘one of the staunchest defenders of slowness in our time.’ As she sees it, waiting is a good thing. It’s not a waste of time but rather a use of time. She also references Richard Linklater’s film Before Sunrise and its sequel, Before Sunset, both of which address an ages-old question: is there someone out there, waiting for me? Of course, Waiting for Godot makes an appearance. Poor Vladimir and Estragon ‘practice waiting for its own sake and with no particular goal in mind.’ We wait with them, confronting matters of existence and eschatology while time is passing. As Vladimir says, ‘it would have passed in any case.’ A lovely jeu d’esprit for those waiters who like their abeyance with a touch of the metaphysical.”

“In these meditations, Swiss journalist Köhler argues that in an era where time is shaped by technology (the instantaneity of e-mail, the delays imposed by customer service ‘please wait’ messages), ‘the art of waiting needs to be learned.’ Her book is modest in size but abundant in content, and allusive but fully accessible. It insists on ‘the joyful aspects of waiting, slowness, and rest.’ Köhler shares a relaxed, cosmopolitan erudition with the reader. A veritable pantheon of distinguished writers accompany her reflections, among them Samuel Beckett, Dante, Homer, and Marcel Proust. What waiting means, as it occurs at different times and in different places, is the governing question. Köhler observes waiting in the train station, in the doctor’s office, and in bureaucratic agencies. Going from the waiting of children for celebrations to the waiting of condemned prisoners for execution, she conveys a sense of both the gift and the anxiety of time. Along the way are enriching tidbits: an etymological digression into the word ‘wait’ itself, a historical reminder of the appearance of a railroad timetable. What haunts this lively challenge to the passage of time is the ‘paradox of an overabundance of too little time’ in contemporary life.”

“Dead eternities at railroad stations, airports, and the call centers of life: ‘please wait’ is the mantra of the new rhetoric of appeasement, the synthetic global muzak that has made patience the cardinal virtue of service-based societies,” writes Andrea Kohler, a cultural correspondent for the Swiss daily newspaper Neue Zuricher Zeitung and the recipient of the 2003 Berlin Book Critics Prize.

With lyrical prose and a sophisticated perspective, the author takes us on a mind-expanding journey through our accelerated times where we spend our breaks from work in gyms and spas in order to get in shape, where escape from work has become just another pathway to greater productivity and efficiency.

For Kohler and many other creative souls, homo sapiens is the waiting animal capable of anticipating death. The idea of waiting for someone appeared in the sixteenth century but since the eighteenth century and the age of romanticism, this state of being switched tracks to a more painful side — one waits with impatience and irritation. Those kept waiting fret as precious time goes by and replay in what Kohler calls “a continuous reenactment of the primal scene of abandonment.” Think of the feelings you have when you are put on hold and hear the familiar words “Please wait for the next available representative.”

With great elan Kohler lets light in from all sides of her topic with her commentary on childhood as a stage of life steeped in rituals designed to familiarize them with this listless state of being; the practice of keeping others waiting as the prerogative of the powerful; the government as the quintessential modern waiting room; Proust and Kafka as the crown witnesses to our era’s accelerated time; the modern doctor’s waiting room as a limbo of dread and uncertainty; and the fairy tale characters of Snow White and Sleeping Beauty as creatures of waiting.

Passing Time: An Essay on Waiting by Adrea Kohler is a philosophical masterwork on time, transitions, patience, and the end-game of death.

[…] In a recent article from The Chronicle of Higher Education that advocated for the study of theatre, one of the most often reported findings from professors was that, simply, their students did not know how to wait; how to pass time in a singular fashion without immediate distractions. Until they took the time to learn (in this case, through patience and acting lessons in stillness), students would fidget, seem distinctly uncomfortable, and even start toward phones that weren’t there. Andrea Köhler, who won the 2003 Berlin Book Critics Prize and is currently cultural correspondent for Neue Züricher Zeitung, a Swiss daily newspaper, addresses what waiting means — and why it’s important to our humanity.

Waiting is not necessarily just a liminal state, a time when we are absently in between two things. You can wait (even when it’s not on your own terms) with purpose, even if the goal itself is waiting. Köhler writes that waiting is important because, among other things, it reminds us of our mortality and helps us slow down to appreciate the life we’ve got. She defines and classifies the types of waiting, anxiety being different from standstill, which itself is distinct from expectation and what we do when we wait for love. The book is a combination of autobiography and philosophy, and Köhler references a bunch of heavyweights, including Foucault, Nietzsche, and Camus on her journey. As Plato discovered in his dialogues, “Waiting inspires philosophy, and that philosophy in turn gives meaning to the wait.”

Even the evolution of the word speaks volumes; Kohler reveals that the word originated, in the modern sense, in the 13th century, but only gained its overtones of agony in the 18th, when Romanticism reigned. Just like how we’ve defined and redefined the meaning of waiting, it defines us, in how we spend those moments in between. As those theatre students might learn, if you’re going to put on a meaningful production of Waiting for Godot, you have to understand how and why to, well, wait.